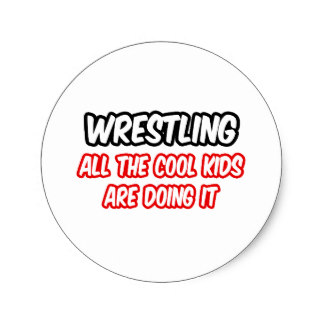 Odds: The ratio between the amounts staked by the parties to a bet, based on the expected probability either way.

Peer pressure: The influence from members of one's peer group.

In America our wrestling tradition runs deep, but not our popularity. Tireless effort doesn’t always generate results, and even then, results don’t always generate recognition. Have you ever felt the burden of being unpopular? Or even just unnoticed? It takes courage to put it all on the line with no guarantees of fans in the stands. Odds are you won’t make it big, and your peers think it isn’t worth it. But what do you think? Are you still willing to stay the course and trailblaze your own path? In the process of creating a lasting legacy in an often undervalued sport, stay strong!

As a youth athlete growing up in Sicklerville, New Jersey, it was every young man’s dream to compete on the biggest stages in the world of sports. That meant scoring a touchdown for your favorite NFL team on Sundays, or throwing down an alley-oop in the NBA finals. Either way, our aspirations were set on becoming professional athletes, earning millions of dollars, and doing it all on television where the world was watching. You could imagine the confusion when I chose wrestling.

During the winter season, if you were a black kid in a predominantly African American community, you played basketball. That was just the nature of the culture. Wrestling was taboo; a sport for misfits, and certainly not something that the cool kids did. Unless you were into WWF, most people had never seen any form of wrestling. It wasn’t glamorous. We worked hard but were hardly relevant, and the only fans that would attend our duals would be our parents and school faculty. We’d skip lunch and spit in empty bottles all day to make weight. We’d tuck our sweatpants into our socks and had funny looking ears. Sometimes we’d get called “gay” because of our tight uniforms and the positions we’d get in during a match. We saw it as battle, and not everyone understands that.

But wrestling can be a tough lifestyle to be proud of, and the weight of all the negativity lead me to question my passion for the sport. There was one specific time when the load became too much to bear, and I actually tried to quit the wrestling team so that I could play basketball instead. I’d had enough of being an oddball, and I longed to be a part of the “in” crowd. I was about ten years old, and all of my buddies from school were on our town’s basketball team. Some of my closest classmates were signed up for the league, and each player received a cool jersey with their last name on the back. All that I'd ever gotten to wear in wrestling was a tight green singlet that belonged to someone else the year before. I came home from school one day and told my parents, “That’s it! I’m quitting wrestling and playing basketball! I’ve done enough in this sport, and I want to try something new.” My Mom and Dad knew why I wanted to quit. They laughed, and wouldn’t even entertain the idea of allowing me to withdraw from my best sport. They reminded me that if I quit then it would just make it easier to surrender on the rest of the commitments that I would make throughout my life. I had been blessed with a tremendous gift to be great at something and it was my personal duty to take full advantage of it -- no matter what the world thought of me. From that day forward, I never looked back, and fully embraced my love for wrestling.

Reflecting now, I’m grateful that my parents didn’t give me a choice in the matter. Although we aren’t a mainstream sport, wrestling is identifiable because it so closely mimics life -- the struggles, the adversity, the sacrifice, and the tireless effort to stand out. Wrestling is everything that it means to be human. It has helped me build character and develop into the man that I’ve become. Because of wrestling, I earned a college education at no financial cost, I’ve traveled the world, met my wife and have built countless other lifelong relationships. I ignored what others said about me, and the pressure to pursue other, more glamorous commitments, and stuck with my passion.

My questions to you are: What will you transcend? Can you beat the odds and ignore the pressure? I had to go against the grain, overlooking race and culture to remain in our sport. Some of you may be experiencing other difficulties. Maybe your parents don’t understand the sacrifices involved or why you chose to wrestle. Maybe you’re the only person in your family who wrestles, and no one can relate to you. Maybe you’re not any good, and everyone is asking why you keep going back. Maybe you’re a young lady and people are questioning why you would want to participate in “a man’s sport.” Many people won't understand it now, but they will learn to respect you later for it.

How long are you willing to stay the course, and potentially unleash something within yourself that you never knew possible -- something that you won’t ever achieve if you quit now. To all of the young wrestlers throughout the world, regardless of race or sex, I want to let you know that wrestling is cool. YOU define cool. Create your own lane, and don’t listen to the hate and criticism. When I return to my hometown now I walk a little bit taller. I wasn’t extremely popular in high school, but this past year our district voted to name my high school gymnasium after me. The Jordan Burroughs gymnasium at Winslow Township High School. Not bad for a wrestler.

Remember that respect is earned, not given. Because I stayed focused and disciplined on my journey I became successful. Never let doubt deter you from your dreams. To the rare few who decided to stick with it, the ones who pursued their passion despite the odds: You make our sport great. We are uncommon. Take pride in it, and show the world that greatness isn’t only found on the world’s biggest stages. Sometimes life’s greatest dreams are realized in a small gym, in some middle-of-nowhere town, packed with a bunch of misfits.