It Never Gets Easier, You Just Get Better. 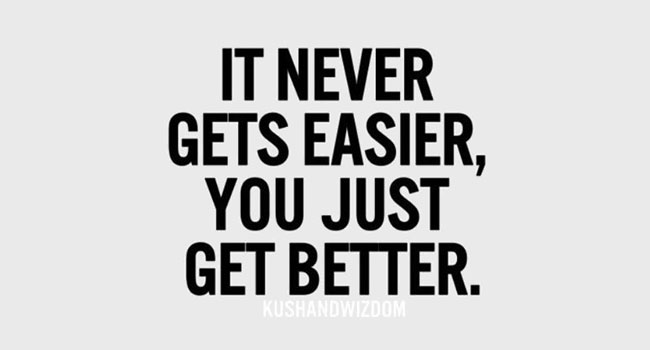 It never gets easier, you just get better.

Excellence is never easy to attain. It is often accompanied by major sacrifices and an extremely high level of uncertainty. It is achieved only through a constant mental and physical battle to arrive at your best, and then replicate that performance over time...over and over, and over. Consistency is what really separates good athletes from great ones, and greats from legends. Discipline in preparation is where it begins and execution is where it is celebrated. Do you have the hunger to not only get there, but to stay there?

I read a book a few years ago by a mental guru named Tim Grover. He has worked with some of the best professional athletes in the world, including NBA players, and a number of them team leaders. As a captain, you are usually looked upon as the go-to guy, the closer, the man taking the last shot and expected to drain the game winner. Under these circumstances, a large number of individuals would suffer from performance anxiety and shy away from such a pressure-filled position. Grover says, “Most guys don’t want to take the last shot not because they are afraid they will miss it, but because they are afraid that they will make it, and if they do, they will have to keep making it.” With excellence comes expectations, and that is beyond the comfort level of a lot of athletes. Or worse is, they make the shot and become satisfied with basking in the glory of repeatedly telling the story of a one-time game winner. I’ve wrote a list of principles that I’ve found helpful in my pursuit of excellence to win more World Championships than any American wrestler in history.

As you attempt to maximize your abilities and accomplish lofty goals, there will be many distractions along the way. Stick to the things that have gotten you this far and the effective system that has worked for you. Your will to prepare should never diminish regardless of success. Now that you’re the champ, it’s time to turn it up and train harder. Your opponents are coming for you, and the world is watching. Wrestling is an incentive based sport. There are no financial guarantees, and you are only paid if you perform. If you hope to be the best at anything in life, you will have to make sacrifices. Decide what is important to you -- being financially stable or making history? If it were easy, everyone would be the best in the world. What are you willing to give up now to get to where you want to go later?

Humility comes before honor. Ignore the hype. The better you get, the more people will begin to let you know about it, and that can lead you to a false bravado -- a belief that you are invincible. Don’t believe them. Continue to train like you’ve still got something to prove every single competition, and be respectful of the people who have helped you arrive at this level. Be open to constructive criticism from the people you trust, and be willing to take advice to help you evolve.

It is important to surround yourself with people who aren’t impressed by your accomplishments. You need individuals who are always willing to be honest with you even when it hurts. This is absolutely necessary. Stay away from from the voices that conflict with your inner circle, and create a place that harbors positivity. Each member of your team should be fully dedicated to helping you be at your best at all times.

There should be a sense of pride that comes with being champion. Vince Lombardi once said, “The harder you work, the harder it is to surrender.” When I step on the mat, I believe in my heart that I deserve to win. I’ve trained for countless hours, skipped numerous meals, lost weight, and spent a large number of days away from my family. I don’t know what the guy across from me has done, but I can speak for myself, knowing my own commitment to the sport. I will not let this guy beat me. I refuse to lose. Before a wrestling match each guy steps to the center of the mat with the same goals. The realization, however, is that there is only one gold medal, and the top of the podium isn’t big enough for the both of us. Only one of us is walking off this stage a champion. Wrestling is a true testament of willpower and determination. Who wants it more?

Put the hammer down

Why does the challenger often times seem hungrier for the the opportunity to win the title than the champion seems for the opportunity to defend it? It is important that you bring the fight to your opponents. I’ve never liked the term “title defense.” When you feel as though you have to defend or protect something that you own, the tactics mostly involve waiting, poised to not let anyone in. Imagine if you were always threatening, keeping your opponent off balance and controlling the match tempo. Disciplined aggression makes a great competitor. The champion should always be hungry to not only defend their home, but to not let anyone believe that they’re even capable of getting close to it.

Rise to the occasion

I’ve wrestled in some pretty hostile environments as a competitor. I’ve been in an arena filled with thousands of people rooting against me, it can sometimes feel like you're up against insurmountable odds. At times the referee is giving your opponent favorable calls and the fans in the stands are on the edge of their seats just hoping to seeing an upset. Are you going to step up and show them why you’re the champ? Or are you going to be on the wrong side of history? Control the things that you can control. It’s not always going to be pretty, but the only thing that matters is getting your hand raised. Push yourself through the fatigue, through the ref’s involvement, and beyond your opponent’s preparedness. You are the champ for a reason. Believe it, and prove it.

You’re going to get everyone’s best shot, but would you want anything less? It’s your job to give them your best as well. True competitors want to beat the best guys on their best days. Most wrestlers hold themselves in high regard, and believe that they can and should be champion. It’s your job to break their belief. As a four-time World Champion, on most occasions my challenger is well prepared, and having been a favorite for years, some guys train specifically to counter my style of wrestling. My confidence comes from my preparation. Becoming champion takes resolve and courage, but remaining champion takes consistency and humility. Everyone believes they can win until the match begins and you remind them that they can’t. Train hard and compete hard.

I once read that there are two people in this world --  campers and climbers. Campers are those who find a comfortable spot in life after accomplishing a goal, decide they’re satisfied and settle there. Nothing wrong with that. Climbers, however, are those endlessly hungry individuals who take a brief stop to reevaluate their goals and raise the bar, heading back up the mountain in pursuit of something bigger. If someone would have told me years ago that I would be an Olympic Champion, I couldn’t have imagined my wrestling career being much better, but now here I am in pursuit of a second Olympic gold. As an athlete, it’s crucial to have a lofty goals, and an incentive to drive you to compete it. What’s your why? Set exceptional targets, that will take time, diligence and a ton of hard work to accomplish, and then work toward them every single day. This purposeful pursuit is what makes wrestling great. Standing on top of the podium is a fleeting, five-minute ceremony, but the memories created chasing the dream and character built along the way last a lifetime.

Four-time National Champion Dan Russell once told me that each time he stepped to the mat for a competition, he would ask himself two questions: “Did I give 100% in practice, and am I willing to give 100% right now?” Regardless of how hard you train, there comes a time where you have to execute the skills that you’ve learned and be rewarded for your sacrifice. Execution is what makes you memorable. Remember the guy that trained like a madman but could never put it together in the actual competition? Me either. As the figure of speech goes, “The hay is in the barn.” The work is done, the weight has been cut and your family is in the audience. Don’t let your fear hinder your abilities. It’s time to create a legacy.