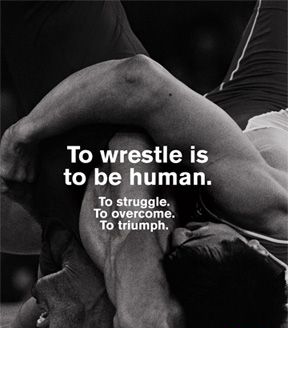 My letter to this sport.

Let me start by saying that I love you, still. Although our most recent encounter could be described as anything but pleasant, I couldn’t imagine my life without you. As you probably already know, these last few weeks have been difficult for me. You have a way of humbling even the most confident men. I thought I had come close to perfecting you, but here I stand corrected. Until August 19, my best had always been enough, and then all of a sudden it wasn’t. That’s the nature of sports. Someone once told me that the reaction associated with a loss is tangible to how much you’ve invested into attaining whatever you failed to gain. Well,

Wrestling, my commitment to you, and your greatest prize caused me to spill emotions I didn’t think I was capable of unleashing. And then there were actually two of these emotion-erupting events in the same day. There I was, in tears, a champion collapsed in a pile of his unrealized dreams.

I feared it...it happened...and now I face it.  But Wrestling, please don’t let my pain stay too long. I’ve got a family, friends and fans that needs me back. I’m sitting down at my computer to write to you. I’m spilling everything that I need to say to you into this keyboard, in hopes of capturing these feelings, bottling them up and leaving them within the contents of this letter.

Rio to Houston to Denver to Lincoln. I finally made it home. The stewardess cheerfully addressed all of the plane’s passengers as we were escorted to our gate. “Thank you for flying with us on United Airlines and welcome to Lincoln, Nebraska.” After almost 20 hours of traveling, I had finally touched down in my city. I unbuckled my seatbelt, stood, and grabbed my USA backpack from the stowage bin right above my seat in 4A. As I walked off the plane and emerged from the walkway into the terminal of the Lincoln Municipal Airport, I quickly realized things were normal again. The silence was deafening. I was an Olympian returning home from his second Olympic Games --  the most recent in Rio De Janeiro, Brazil. But unlike arriving home from London, this arrival was distinctly different. In 2012, I was flown directly from the UK to Los Angeles to make an appearance on the Jay Leno Show. There were first pitches and parades, and a gold medal that the entire world wanted to get their hands on. Not this time. On this day, in this airport, there were no balloons, no reporters, no fans eagerly awaiting me. Only medalists get receptions. So I walked through the airport inconspicuously, headed down the escalator to baggage claim, grabbed my luggage off of the carousel and hailed a cab home.

Twenty-three years ago I was the shrimp who’d hide under the bleachers and cry when you let me down, Wrestling. On August 19th I was a man who’d faced the world, crying in front of millions. But I love you, still -- not because of what you’ve done for me, but because of who you’ve made of me. I’ve dedicated my life to getting to know you. When we first met, I was a five-year-old runt. Growing up the youngest of four, I needed something to mold me -- to make me tough. You taught me to fight. I was shy and I didn’t have a lot of friends. You gave me teammates. I had yet to find my faith, and I needed an idol to pursue. You offered me trophies. You offered me gold. Instantly, you hooked me.

Over the years our two names have become synonymous. You weren’t just a fling. I was committed for life to representing you with honor. I always spoke highly of you. When the IOC wanted you gone, I defended you. When you needed someone to help you appeal to the masses, I was Mr. Right. This was always a mutually-beneficial relationship, until now. Carrying us this far has wore me down. “Heavy is the head that wears the crown,” they say. And you snatched my crown without my permission. You took years to turn me into a superhero, and then just at the peak of my powers you took six minutes to make me human again.

But God honors the humble. Being human ain’t so bad. So as I consider our relationship, Wrestling, I’m finding solace in being who I am without my singlet. I’m waking up early not to rush to practice, but to make breakfast for my family. I’m driving my car past the wrestling room to take my son to gymnastics class. I just need some time to heal. I hope you understand. It’s not you. It’s me. I need a fresh perspective, and if I hurry back to you I’ll be sacrificing this opportunity to grow. When you stop seeing gold, you gain the clarity to see life’s true treasures. Maybe I’ll see ya around. Maybe.