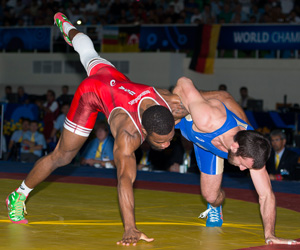 Rivalry. Jordan Burroughs. Denis Tsargush. These are two names synonymous with freestyle wrestling’s 74-kilogram weight class. Tsargush and I have combined to win the last six World Championships at that weight class. You didn’t read that wrong. Six. From 2009 to 2014, there have only been two different champions. Tsargush was a World Champion in ‘09, ‘10, and ‘14. I won in ‘11, ‘12, and ‘13. Before us, there was this little known wrestler from Russia who owned the weight class; you may have actually heard of him before. His name is Buvaisar Saitiev.

Tsargush was born in 1987; me in 1988. He is 27. I am 26. Our rivalry looks to capture the attention of the wrestling world for years to come. Rivalry means vying with others for victory or supremacy. Supremacy. I believe I speak for the both of us when I say that we are not only competing for victory, but for supremacy, and arguably the status of being labeled the best pound for pound in the world. It’s the prototypical battle the beloved superhero and the despised villain.

Our rivalry is reminiscent of the classic 1980s NBA battles between the Lakers and the Celtics, headlined by their two leaders, Larry Bird and Magic Johnson. Between 1980 and 1990 the Lakers and Celtics combined to win eight NBA titles. Bird captured three, and Magic five. They were fierce competitors who basked in the glory of beating one another.  They became infuriated while watching their adversary celebrate a championship, confetti dropping from the rafters, knowing they had to wait a whole year for another shot.

We’ve both got three titles. The question is (other than the obvious comparisons) which one of us will be Magic and which will be Bird? Could the both of us be Bird, having witnessed our last time on the big stage being presented with the belt? Or could we be Magic, with more championships in our future?

Our rivalry has really heated up; especially after he beat me in last year’s World Championships, continuing on to win the gold in Uzbekistan. The fierce rivalry has been renewed, and the wrestling world awaits Las Vegas. The race is on to reach a coveted fourth title. This is the first time that the World Championships will be on American soil since 2003, when they were hosted by Madison Square Garden. I would say that I have a definite home court advantage. Usually, the Worlds are far from home. The American team is traditionally the team that travels the furthest. In 2014, we were in a time zone 10 hours ahead of the east coast, making acclimation and wrestling at a high level tough. This year, we will be close to home, and our foreign competitors get to do all the traveling.

That is what is so great about the sport of wrestling. When you have two individuals, equally skilled, comparatively motivated, and representing the pride of their home countries, rivalries are created. The best are unintentional. They aren’t drummed up through leagues, and not by promoters formulating matchups, but are forged by fate and an undeniable drive to achieve your goal no matter who is standing in your way. To this day, the only person who has stopped me from being a World Champion is Tsargush. The only person who has stopped him is me.

As much as I hate to admit it, I need Denis Tsargush. He is a humbling reminder, and a motivating presence. On mornings when I hit the snooze button and have an internal debate on whether I should get out of bed for an early morning run or lift, I picture me on my belly, Tsargush on top of me, arms raised in triumph flexing to the Russian crowd in Uzbekistan. I respect him, but I want to crush him. He wants to win. I want to reign supreme. It’s three to three. Who’s going to get to four first? Although we both have yet to make the 2015 World Team, stay tuned, this is the preview of what could be something special.

@LoloBurroughs Ora is ready for wrestling practice at 12 and a hair show at 1. 😂