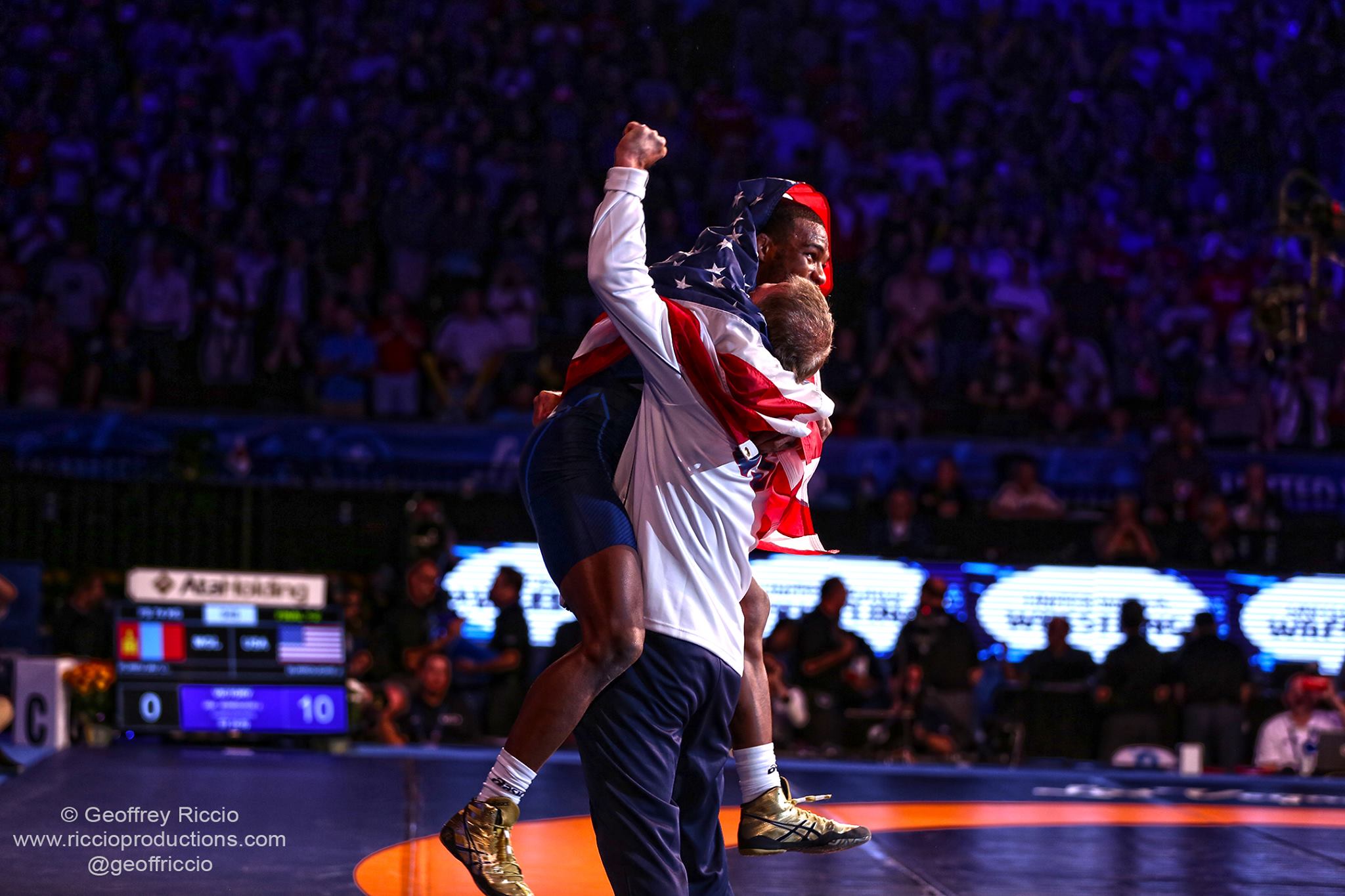 In 2004, the Winslow Township Eagles, my alma mater, had its first ever state champion in school history in wrestling, and it was a very proud moment indeed. At the time, I was a 15-year-old sophomore wrestling at 112 pounds, and being the best in the state was every young man’s dream. The winners all received shiny gold medals, courtesy of the state, but more importantly, a coveted letterman jacket. The jacket needed no explanation. If you had one of those bad boys, you were the man.

As I walked into homeroom the Monday morning after the tournament, our school’s video production team had just started the daily announcements. Periodically, in the instance of a historic performance by one of our student athletes, the crew would make a special presentation to the student body to recognize the achievement. I smiled as I listened over the loudspeaker: “This weekend, we had our first state champion in school history. Please everyone give a round of applause in helping us congratulate our very own Vince Jones on a job well done.”

You didn’t actually think it was me who won did you? Not yet. I still had some growing to do, but this moment created a butterfly effect that has essentially shaped my life until now. Vince was the best wrestler in my high school. He was our only two-time state champion, and interestingly enough, my best friend. As kids, we were actually next-door neighbors. And with his extraordinary success on the mat, there came a good amount of college coaches pulling up to the house next door, hoping to recruit my best buddy. I looked up to him, and whatever he was doing, you could find me following very closely behind trying to imitate him.

It was no surprise that when Vince told me the head wrestling coach at the University of Nebraska was coming to his house one afternoon during the summer of 2004, I was eager to be there. I sat on the couch attentively, hoping to get a chance to meet Mark Manning for the very first time. As Mark arrived and seated himself in Vince’s living room, we introduced ourselves and even joked about the possibility of him coming back in a few years to recruit me. He laughed it off of course. I was just the neighbor of the guy he really wanted, and at the time he had absolutely no idea who I was. He had no reason to. I had yet to even place in the state tournament. Little did any of us know on that day, that over the next 11 years, he would guide me to become one of the greatest wrestlers in United States history.

How did I go from being a one-time state champion to the best wrestler in the world? I bought in. Not like an ante in a poker game, when you throw in a big blind for a dollar in hopes to catch a pair on the flop, but by completely trusting in the philosophy and the culture that your coaching staff has built around you. If you’ve seen me wrestle in the last five years, there is a good chance you have seen two people trailing close behind me — coaches Mark Manning and Bryan Snyder. To say these two have been instrumental in my success would be a definite understatement. Having trustworthy coaches in your corner is truly invaluable, but that relationship is mutually beneficial when you are receptive to their value system.

One of the most underrated attributes of an athlete is coachability; an intangible quality of character that requires focus, diligence and humility. This means having a certain level of approachability, that is both welcoming and responsive to instruction from others with your best interest in mind. These components can not be accurately measured, and so they are often overlooked. But I believe they’re the ultimate determining factor in the development and success of a wrestler. Always remember that humility comes before honor. There are very few wrestling rooms that I walk into in this country where I am not the most accomplished guy on the mat. So it would be hard to believe that of my two personal coaches, one is a former NCAA Division II wrestler (Manning), and the other was never an NCAA champion (Snyder).

How could I trust these guys to lead me to be the best wrestler in the world? The answer is that I humble myself. It’s not always the credentials of your coaches or training partners that help to get you to the top. Let that sink in for a minute. I’ve allowed myself to take guidance from both teammates and coaches in the name of pursuing greatness. The best athletes in the world listen more than they talk, constantly looking for ways to improve on their craft, and show respect to those who are in charge of getting them to the top.

Mark Manning is a student of the sport, and he competed in an era of great African-American wrestlers. He would go on endlessly about Kenny Monday, Nate Carr, and the greats of that time period, and how my skills were comparable to theirs. He would tell me that if I worked tirelessly, I could one day be an Olympic champion. At the time I thought, “This guy is crazy. I’m just happy to be here.” See, I wasn’t born to do this, and you probably weren’t either, but who says we can’t be the best at it?

Neither of my parents ever played organized sports as kids, and I was the first and only person in my family to ever wrestle. I’m a prime example of the fact that athletes are built, not born. I was a one-time state champion in high school. When I was young, I felt inferior and insecure because I didn’t think I had the tools to be great at this sport. I couldn’t afford the cool camps, and I wasn’t good enough to make the state all-star teams. I never wrestled at Fargo, and I didn’t attend a high school with a powerhouse wrestling program. I was a normal kid with big dreams. I knew in order to be the best, I would have to do twice as much as the kid who grew up in a wrestling family.

I began to study the greats closely, and I changed my mindset. I went from “How could I possibly do this?” to thinking “Why not me?” Only you can decide how far you will go. Never set limitations for yourself based on what others couldn’t do. You are special, and you have greatness inside of you. Stop right now, and say your goal. I will be a _______ champion this year. I believe you can do it.

In order to reach the goal that you just thought about, you must have one very important ingredient: Faith. Faith is believing in the unseen. It is confidence that you have what it takes, conviction that your coaches are putting you in the best position to win, and belief that it will happen. Train every day with the hope that it is possible, and it will occur. You will achieve your goals. My question to you is what are you willing to give up to become what you desire to be? Better yet, who are you willing to trust to help you become who you want to be?

Don’t just be in. Buy in. As a young man, it is important to surround yourself with people that you trust absolutely. Trust plays a major role in becoming successful, and although all people are self-made, there are instrumental individuals who help along the way. There is no other person on the planet who believes in my wrestling ability as much as Mark Manning, besides maybe my Dad. Coaching isn’t just a hobby. These guys are mentors, teachers and our fathers away from home. A good coach makes you feel as though you’re capable of anything, but you have to give them everything in order for them to do their job. They are there to get the most out of us, to push us beyond our limits, and give a good kick in the butt when we get down on ourselves. If we could do it on our own, then they wouldn’t exist.

My Nebraska coaches aren’t the only coaches whose system I buy into either. I believe in my national team coaches as well. When I am in Colorado Springs at the Olympic Training Center or with them overseas, I am a student to their teaching. Bruce Burnett, Brandon Slay and Bill Zadick have all played a role in getting me to where I am today. I credit my success to the dozens of people who have helped me along the way. But I’ve humbled myself first and entrusted the people around me for support. It’s easy to let yourself down, but hard to let your teammates, family, coaches, and your country down. You need people in your life to hold you accountable for your thoughts and actions.

There will be times throughout the season when you don't truly believe in what your coach is telling you. Other times you may believe it, and just have no interest in doing it. There comes a point in every practice and competition when you decide how much effort to give. If you want to be great, remember that you don’t get applauded for giving your all once or twice, but doing that consistently will separate you from the pack. Give 100 percent to the cause, every single second of every single lift and practice. That masterpiece you want to create, it takes just one stroke of the paint brush a day. State champion, you can become it! NCAA champion? It’s possible. Olympic champion? Why not?

Everyone wants to win, but few are willing to venture past the threshold of uncomfortability to get there. Who says you can’t be the best ever? Confidence comes from preparation, and belief in the system you have in place. I remember days when the team would be finished with practice and I would be off the mats, untying my shoelaces, ready to shower and head home. Manning would be scouring the room trying to find me amongst all my exhausted teammates to put in more work. Have you had this happen to you before? Don’t hide, embrace it. I know it’s hard. It’s tough to love it when you're in it. Coach may seem crazy now, but at the end of the season when you’re standing on top of the podium with a smile on your face, a gold medal around your neck, and stitches in your eye, he won’t seem so crazy. I promise.