Burroughs, 30, faced off against Italy’s Frank Chamizo, the two-time world champion and Olympic bronze medalist, for the third time this year in Sunday’s bronze-medal match in Budapest, Hungary. Each won one match coming into the third meeting.Burroughs took a 1-0 lead after Chamizo couldn’t score in 30 seconds. Burroughs got a takedown for a 3-0 lead, but Italy challenged and the score became 3-2 in favor of Burroughs with a little over 90 seconds remaining. It was then Team USA’s turn to challenge on a step-out call, but the Americans lost the challenge and Chamizo went ahead 4-3. Burroughs then tied it, 4-4 and, when Chamizo couldn’t score as the clock ran, down Burroughs captured his second world bronze and sixth world championship medal overall based on tiebreaker criteria.
Tweet
Read More
Source

The mumbly raps and crisp beat of Travis Scott's "Goosebumps" dissolve into an outro as Olympic wrestler Jordan Burroughs — two hours into a workout at the Palestra — catches his breath in his distinctive squat, his weight perfectly balanced on his toes.

"If you look at my iPod, I've got so much different music," he says. "I think that it kind of describes me as a person, just being a chameleon to whatever particular environment that I'm in."

LINCOLN, Neb. — Jordan Burroughs jumped to his feet, flashed a smile and pumped both fists.

And the crowd erupted.

It’s been more than seven years since Burroughs finished his standout career at the University of Nebraska, but he took full advantage of another opportunity to put on yet another show for Cornhuskers fans.

Published May 22nd, 2018 by Jordan Burroughs

NEW YORK — Jordan Burroughs says he has rewatched almost every one of his wrestling matches at least 15 times. That’s more than 150 senior matches in the last seven years, following a 148-match career at the University of Nebraska.

There is one event that he can’t bring himself to pull up in full — the Rio Olympics. Burroughs suffered two of his five career senior defeats in Brazil. Shockingly, tearfully, the London Olympic champ left his second Games without a medal.

Published May 17th, 2018 by Jordan Burroughs

One New Jersey wrestler kicked off the Beat the Streets Rumble on the River event with a big victory on Thursday night and another ended the same way in New York City.

Usually held in Times Square, Thursday's matches were contested on a pier with the Brooklyn Bridge in the background.

Editor's note: The Journal Star went behind the scenes with Jordan Burroughs for three months leading up to this year's Freestyle World Cup in Iowa City, Iowa.

PARIS — Jordan Burroughs chose not to look at his freestyle world championships bracket the night before he wrestled.

A well-rested Burroughs navigated his way through a brutal bracket at 163 pounds (74 kilograms), rallying in all five matches before capturing his fourth world freestyle title Saturday.

LINCOLN, Neb. (AP) — Jordan Burroughs used his gold-medal moment at the 2012 Olympics in London to emerge as one of wrestling's biggest stars.

A year later, the world's oldest sport turned to Burroughs to help save its future.

"They needed someone who was consistent, who was marketable, who was eloquent enough in their speech and articulate enough to engage with the media, and who was interested in engaging with the fans via social media," Burroughs said. "It was amazing timing for me."

Jordan Burroughs used his gold-medal moment at the 2012 Olympics in London to emerge as one of wrestling's biggest stars.

A year later, the world's oldest sport turned to Burroughs to help save its future.

"They needed someone who was consistent, who was marketable, who was eloquent enough in their speech and articulate enough to engage with the media, and who was interested in engaging with the fans via social media," Burroughs said. "It was amazing timing for me."

PEOPLE: Wrestler Jordan Burroughs Prepares to Head to Rio Thanks to His Very Adorable Cheer Squad

Will Jordan Burroughs see gold once again at this year?

The wrestler, who took home the gold medal in the men's freestyle 74 kg at the London Olympics in 2012, is giving a sneak peek into how he is preparing to represent Team USA at the Games this year in Rio de Janeiro.

In a clip from NBC, Burroughs' parents Janice and Leroy hold up the wrestler's first-ever participation trophy that he earned at the young age of 6. The two laugh at their son's small prize, but his mother notes Jordan's initial enthusiasm for the sport.

"He was proud, even though it was a 10th-place trophy," she says. "He just knew what hard work would do."


For more of PEOPLE's Olympic coverage, pick up our collector's edition, The Best of the Games, on sale now.

Along with his incredibly supportive parents, Burroughs has a family of his own with wife Lauren Burroughs and son Beacon. The athlete's son wanders in and out of the wrestling room as he pleases, which is just the way that the Burroughs likes it. 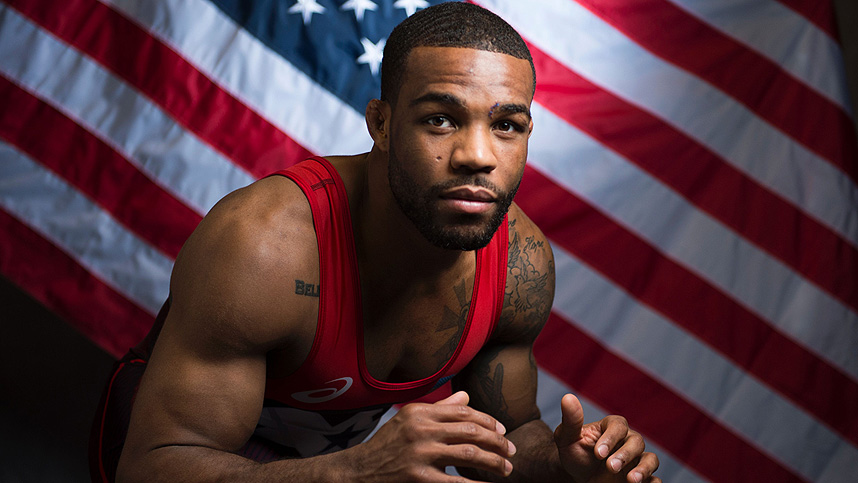 "He doesn't really understand what he's watching," the wrestler says. "He just sees dad throwing guys around, shooting double legs, but at some point he'll understand work ethic and effort."

To learn more about all the Team USA Olympians, visit teamusa.org. The Rio Olympics begin August 5 and will air on NBC.
Tweet
Comments

Now a four-time world champion with 124 wins under his belt, Jordan Burroughs has his mind set on a goal to become the winningest wrestler in American history.

Jordan won his first Olympic gold medal at the 2012 Olympic Games in London, and is now aiming for his second at the Summer Games in Rio.

Off the mat, as a husband and father -- he has a 1-year old with baby No. 2 on the way -- Jordan has been brushing up on his culinary chops and has teamed up with America's #1 Greek Yogurt, Chobani, to be part of its #NoBadStuff campaign, which is all about working hard and being grounded in goodness and positivity -- something he embodies every day, from his determination in his sport to the food he puts in his body.

IOWA CITY, Iowa -- Jordan Burroughs' wife, Lauren, wrote him a note before his Olympic Team Trials match Sunday to tell him he was destined for greatness.

Burroughs made sure his wife was the first person he thanked after he secured his spot in the Rio Games.

“A 24-hour doughnut place,” he said after throwing his singlet into the crowd. “I might go at like 3 a.m.”

OMAHA.com: Former Husker Jordan Burroughs leaving a legacy on and off the mat

Jordan Burroughs talks on his cellphone while his 21-month-old wails in the background. Both father and son could use some sleep.

Burroughs began to understand the collision of life and wrestling when he became a married man in October 2013 and a dad nine months later. One of the most accomplished grapplers in U.S. history suddenly had priorities beyond honing his craft.

It’s a situation USA Wrestling believes is unprecedented heading into an Olympic trials, and it involves Olympic champion Jordan Burroughs.

Burroughs, the reigning World freestyle champion at 74kg, is a heavy favorite to book a place on the Rio Olympic team in the trials finals in Iowa City on Sunday (7 p.m. ET, NBC Sports Live Extra).

Jordan Burroughs controls Carlos Izquierdo of Colombia in the 74 kg freestyle finals. Photo by Stuart Spears. FRISCO, Texas – Five of the six Americans in the gold-medal finals won gold medals in men’s freestyle at the Pan American Championships at the Dr. Pepper Arena on Saturday night.

Baby boy Phelps won’t be the only infant cheering on the U.S. at the 2016 Summer Olympics in Rio! Wrestler Jordan Burroughs, who won gold in London in 2012, is expecting a little one with wife Lauren Burroughs on June 13 — less than two months before the August 5 opening ceremony.

TIME: Road to the Olympics

Burroughs says he was originally drawn to the sport by stars of the World Wrestling Federation (WWF). Nearly undefeated since winning his Olympic title in 2012, he considers himself worthy of the “Mount Rushmore of wrestling.”.

Ridge Lovett, a true freshman, has now wrestled 3 top 10 guys in Gross, Desanto, and RBY all in a row, and none of… https://t.co/8ZwPMQoDeV

Inside these doors, a storm is coming. #GBR x #ToughTogether https://t.co/Qal0mIGrIT