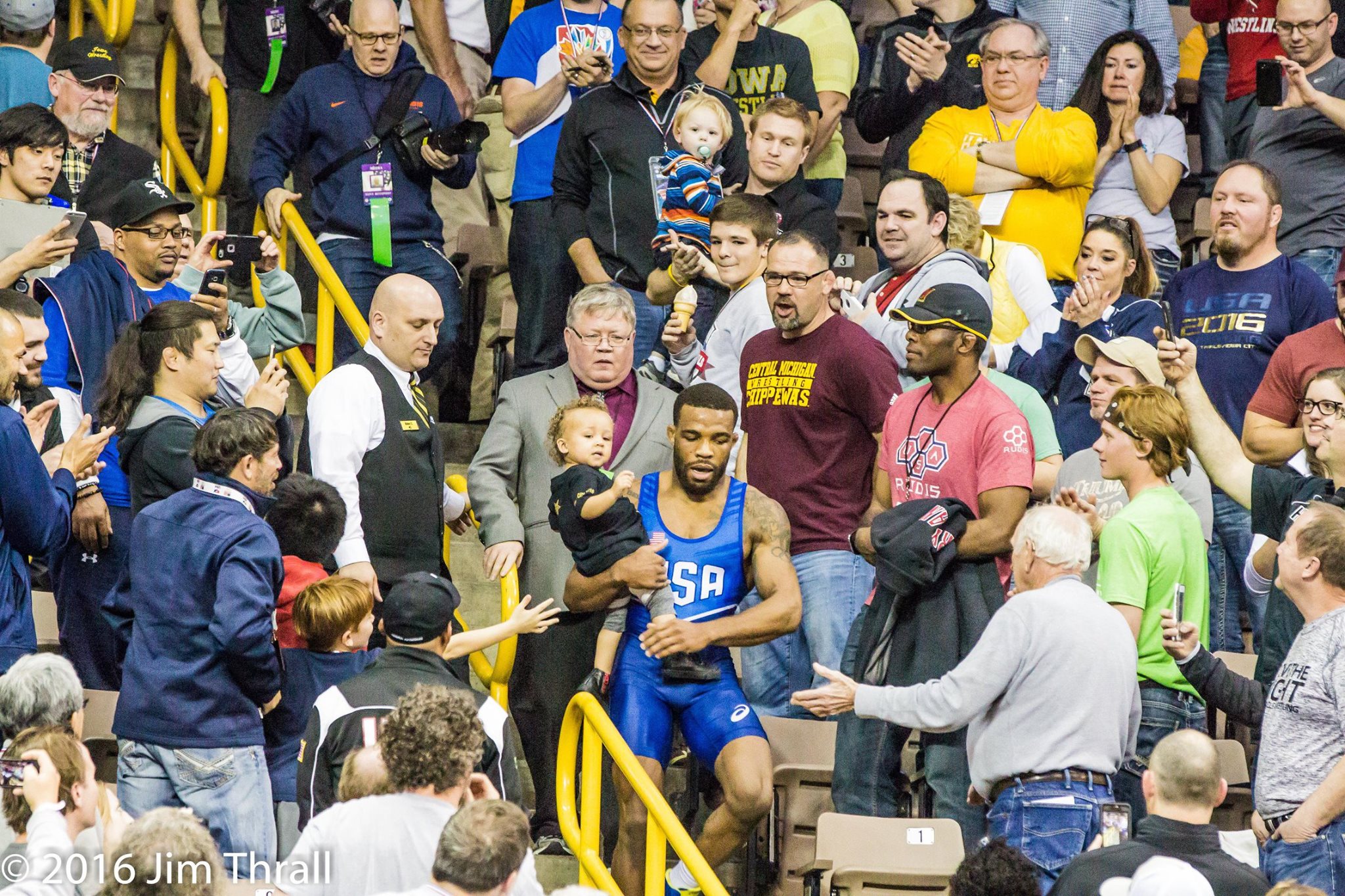 It’s official. I’m going to Rio. After spending the last six months promoting this summer’s Olympic Games, finally “I hope” has turned into “I am,” and I couldn’t be more excited.

For Olympic athletes our lives are lived four years at a time, or as we like to say, in “cycles.” To an Olympian a “cycle” is the four year period that begins at the end of each games. I graduated from college and began my senior level career in 2011, only one year before London, so 2016 is shaping up to be the completion of my first cycle from start to finish.

One question I constantly hear from non-traditional wrestling fans is: “What do you do between Olympics?” Answer: Plenty. Immediately after stepping down from the top of the podium in London in 2012, the pursuit to return to the next Olympics began, and what a long journey it has been to arrive at the title, “two-time Olympian.” Competing at the Olympic Games is the pinnacle of competitive sports; it’s the largest spectacle in the world, and the gold medal at stake has become the most heralded prize in the world of wrestling. But in order to go after number two, you have to make team number two.

Same goals, different surroundings. At the 2012 Olympic Trials I was a 23-year-old whose only dream in life was to be an Olympic Gold Medalist. My wife Lauren and I hadn’t even begun officially dating yet, and there was no baby Beacon to run into the stands to give a victory kiss. My life outside of the arena has changed immensely, but in such an amazing way. I’ve always had a journey, but no one to share it with. Now as a husband and a father, I get to extend my blessings to the most important people in my life, and every experience is richer because of it. Lauren and Beacon travel to all of my events and commitments --  beyond just competition. A challenging task, it takes work and attention to detail to manage a peaceful home while being ambitious. At times, life as a father can be organized chaos, but we choose to love, and that’s what makes it special. I’ve gained a new perspective on life and what wrestling truly means to me, including an accountability partner who makes sure my actions align with my goals. What you hear me say in interviews, my wife makes sure I’m living out at home, and that intimate relationship has helped me be consistent through words and action. My son needs to see success at its highest level to believe that it’s possible. As he grows into a man, I’m prepared for him to be “normal,” but I’m also prepping him for excellence. My wife has shown ultimate selflessness in my preparation, turned my goals into her goals, and made sacrifices for us to capture them as a team. You can still love your family and be the best in the world.

The 74-kilogram weight class looked a bit different this year than it has for the past few seasons. With my two biggest competitors moving up to 86kg for this year's Olympic trials, the stage was set for a potential finals showdown with a wrestler not named Kyle Dake or David Taylor for the first time since 2012. It would seem like the perfect scenario for me in theory, but I knew there were still a dozen formidable competitors eager for their opportunity to become Olympians if I were to falter. In the days leading up to April 10th, I was at times anxious and nervous, trying to analyze who would make it through the challenge tournament, and how they would have intensive scouting reports and top notch preparation for our matchup. The benefit of sitting out of the mini tourney is that you have two matches instead of five, but the disadvantage is that you’re unaware of your finals opponent until a few hours before showtime. Throughout the weeks prior, instead of focusing on one particular opponent, I decided to continue to compound upon my own evolution as a wrestler, enhancing my strengths while improving upon my weaknesses. When you have an unknown opponent I’ve found that the best philosophy is to be prepared to bring to focus on self, and personify a confident swagger that your best is better than their best. I decided to not watch  very much wrestling on the day of competition. I wanted to keep my mind in a place of solitude, and allow my instincts to take over once I stepped on the mat.

I had so much assistance leading into this year’s trials, and I’m especially thankful for everyone’s willingness to help me achieve my dreams. I would love to name everyone, but I might miss a few so I apologize to everyone that I may leave out. My Mom took a week off of work and flew to Lincoln, Nebraska to help Lauren and I with our little boy Beacon to allow me more free time for recovery and rest between training. Bryan Snyder and Mark Manning, my personal coaches, days after the NCAA tournament were back in the wrestling room to help me prepare. My primary training partner over the last month has been Robert Kokesh who has helped to mimic the styles of all of my potential opponents and has been a tremendous drill partner. My wife Lauren was extremely encouraging and gracious, allowed for me to take short breaks from Daddy duty, and didn’t bring too many snacks into the house while I was losing weight. My functional medicine doctor Greg Mongeon allowed me to spend endless hours at his house and in his clinic to make sure my body was performing flawlessly. Tervel Dlagnev spent an hour with me before I competed to talk sports philosophy and made sure I was in a great place mentally. I want to thank the Sunkist kids Wrestling Club for their endless support in my journey and providing room and travel for the trials. Lastly, I want to thank USA Wrestling for always making sure my family is taken care of and providing me with a leadership role amongst my teammates. I have surrounded myself with such a great group of people, the only thing that I have to do is execute on gameplan they provide. We try to control our environment as much as possible so that I can be well prepared for battle and any obstacle that comes with it.

Savor this moment, for it could be your last. The realization of the Olympic Trials is that of all the men and women that stepped onto the mat on April 9th and 10th, there were only 18 that left Carver Hawkeye Årena with their dreams fulfilled. For the dozens of other competitors it is a crossroads in their lives and careers. A time period where they will reevaluate their goals, their training, and if all the sacrifices that they’ve made throughout the years have all been worth it. Only they can answer that question, but the trials has been known to bring crude awareness that sometimes your best isn’t enough, or at least not on that day. I want to encourage anyone who didn’t achieve their goal to walk with your heads high. To continue to fight, not because you failed, but because you just haven’t figured it out yet. That’s what life is all about. I truly believe that it’s less about what you are trying to attain and more about who you become on the journey to attain it. You are exactly where God wants you to be. So this is for all of the wrestlers who are still deciding whether to go on any longer.  For those who have unlaced their shoes for the last time, but didn’t have the chance to leave them in the center of the mat. I want to personally thank you for everything you have given to our wonderful sport. We are a brotherhood, and I’m thankful for your participation. Because of you I am better, and I will gladly share my dream with you as I attempt to capture gold in Rio this summer. Although your dream may have ended early, we are Team USA, and when one of us wins, we all win. Lastly, if you’re still questioning whether it was all worth it, it was, and still is.

Discipline. Focus. Relentless effort. Me and the rest of Team @asicsamerica are ready to take on the world this yea… https://t.co/szLTNXdOvZ